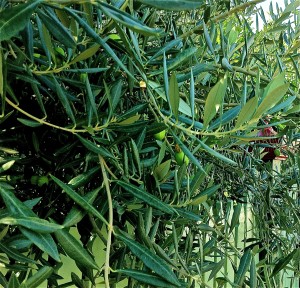 olives as that of the Mediterranean.

That was when having an olive grove somewhere in country Victoria started to rank second place to a permanent New York City dwelling.

Autumn is upon us in Melbourne. Olive trees are popping greens and deep violets. Considering my olive obsession, I have to make a conscious effort to keep my public panting under control. Anything olive sends my heart tumbling. The notion of building a Writer’s retreat somewhere in the middle of a field that I populate with olive trees…

I think building up the shack is making me nostalgic. As a gypsy, I’ve never placed myself in anything cozy. I bought a second hand dryer for cheap today. The swirling scents of pasta sauce cooking on my stove and clean cotton spinning in circles is providing flashbacks galore of running around as a kid.

I’ll scribble more about that later I reckon…

I put my books on a proper bookshelf for the first time today. I’ve never owned a real bookshelf. I opened my poetry book during the process and literally said out loud:

“Damn yo… that is some heavy shit.”

I took a break from building furniture and ate vegan food on Victoria Street. I bought a bathrobe.