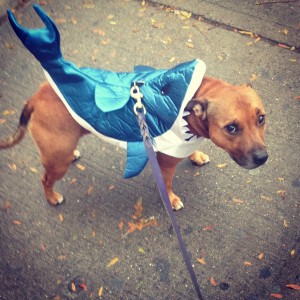 I am very happy that it is Friday blog family. Alas, my book proposal is still not finished. While this sort of sucks, I’m still proud of what I’ve put together over the past 12 days. 12 days isn’t really that long seeing as I’ve been ranting about coming to New York City to get published for over four years now.

What I need is a weekend in the country. And that is exactly where I’m off to after work today. Praise Friday! 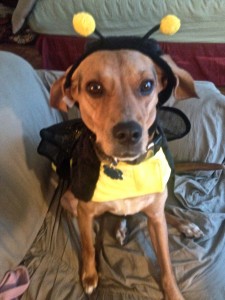 Halloween was fun. Suprisingly, I did not go down to the village this year. It was a little rainy, and I was a bit worn out. But the great thing about New York City on Halloween, is that it really makes no different what neighborhood you’re in. So with Peanut in her shark outfit and Fronkles as a honey bee, I wandered around Hell’s Kitchen with Chris weaving through crowds of costumed city dwellers.

And we also ate candy.

I heard news from a fellow Writer that they are nearly finished with book number three. The first two appear all around, even in libraries. That’s my favorite part of my friend’s success. I like the idea of being in a library.

Naturally anything less than a NY Times best seller = don’t quit your day job. Hopefully after I sell my book I can sell movie rights shortly after and retire at age 40 to build my Ashram.