Alright. So, back in July I mentioned when my zipcar was stolen. To provide some more background, I was with some kid I used to know on his birthday, essentially in the middle of nowhere, and some drunk bogans took the car for a joyride in the middle of the night. Totalled it. And somehow, miraculously, returned it to where it was parked.

Here in America, the land of the free and the home of the brave, that means I get to pay $3500. What’s really baffling, is the reason that my insurance won’t cover it after Zipcar said tough break, is because the car wasn’t locked. The most hilarious part about that, is that Zipcar, in all of it’s genius keyless-ignition technology, assumes that humans will either a) intuitively know that a plastic card locks a car in the absence of a key or b) actually research this topic prior to picking up the “convenient” vehicle.

Had I known how to the lock the car, I probably wouldn’t have anyways. I don’t ususally think about that when I’m camping on a 100-acre block in the middle of nowhere. Then again, I live in midtown Manhattan and leave my backdoor open when I go to work.

Dear Zipcar: I will pay you your completely unfair charge. However, I will tell everyone you suck. Even though I found the staff very helpful, the outcome of the incident is opaque and unethical. 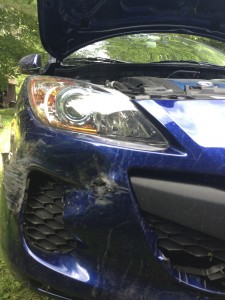 As an insurance executive myself, I understand when you have to bend a rule and take a loss. While the rental agreement says that if the car is stolen and it’s unlocked, the renter loses… one would hope that when a completely creepy disaster like this occurs during a birthday celebration weekend of a regular renter with a scott free history; an exception should be made. The car was stolen, in the middle of NOWHERE, in an utterly freak, and frankly disturbing incident.

Thanks again for suspending my account, totally reasonable of you. No wonder your stock sucked so bad that Avis had to eat you. On that note, I’m going to tell everyone that Avis sucks too – while enjoying my new Hertz on demand account.

Considering this happened in July, I also appreciate you for waiting until right before the holiday season to smack me with the bill. Zipcar, Avis… YOU SUCK!